Trust and the media, a broken relationship

The past months have triggered a broad discussion about so called "Fake News", messages that - often unrelated to reality - make their way through the world and become part of people's decision-making process. Quickly, that term has become a tool to damage the credibility of unwanted messages, no matter if they are right or wrong. While this phenomenon is indeed worth targeting, like many initiatives do, there are key reasons why traditional media have lost their previous standing as trustworthy news sources.

Let's begin with some statistics: a recent Gallup study shows that between 1972 and 2016, the number of Americans who say to have "a great deal" or a "fair amount" of trust in the mass media has eroded continuously from 72% to 32%. The numbers don't look much different elsewhere, for example, in 2015, more than 60% of Germans stated in an Infratest Dimap poll that they have little to no trust in the media. 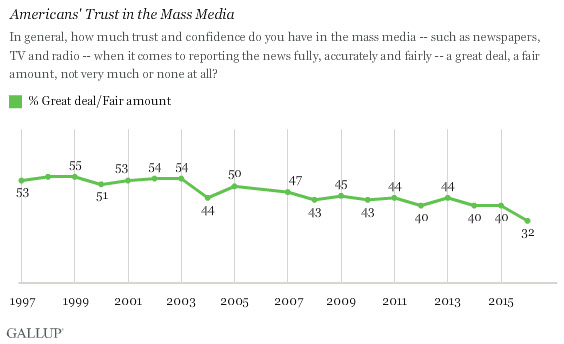 These numbers confirm that "Fake News" - both in the real and the abused sense - is growing on fertile grounds of deep mistrust in the traditional media. Trying to tackle the issue just on the end of "Fake", as many initiatives do, likely won't do much to fix the problem.

At verimedia, we think that the right approach needs to be positive: instead of only flagging the bad apples, we should encourage more trees to produce good fruit: news that people begin to trust again.

We urgently need this to re-strengthen decision-making processes in our democratic societies, which simply cannot exist without good and trusted information. If we lose reliable information sources, our democracies will erode and ultimately disappear.